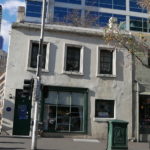 It’s amazing to see the support that’s been rolling in for Lola and George since their story hit the newspapers last week.

ICYMI: Their home, Melbourne’s heritage listed Russell’s Old Corner Shop, is in dire need of refurbishments to make it safe for them – at least $30,000 worth of repairs. The couple, and their family before them, have maintained this precious old building over the decades but they don’t have the money needed to save it from collapse now.  The house was built in 1850, Lola, who’s now in her 90s, has lived there since she was one month old and her family have lived there since 1899! I think that’s partly why the couple’s story has struck such a chord with people from all over the world who have already made donations to help with the repairs. Melbourne is known for its heritage buildings and what represents heritage more than a lifetime spent living in the same home?

I’m always banging on about the importance of preserving Melbourne’s heritage buildings and the rate at which we’re ripping them down. This building particularly resonates with me because I went to design school in a beautiful heritage building across the road when I was 17 years old, and that building is no longer there because it was demolished to make way for development.

So, when I read Lola and George’s story, I knew it was time to practice what I preach and throw my weight behind helping this lovely couple save the home where they want to see out their twilight years.

The couple are genuinely astonished by the support that been rolling in so far – both donations, and offers to chip in and contribute to the work that needs to be done. When I saw Lola yesterday she told me: “At times you get depressed because you think there’s no hope but we’re totally overwhelmed by the generosity of people.”

We’ve been told by the council that they’ll commit to saving the wall that’s currently being propped up, but that fix will only last for about five years but I want to help Lola and George raise enough money to save the whole building long-term. It’s so important that we retain the history of our old buildings. Will you help us help Lola and George save this Melbourne treasure?