My guide to Rome 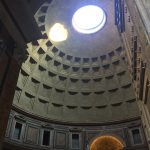 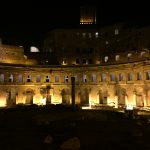 What can you say or write about Rome that hasn’t already been said or written? Before visiting with World of Design I’d dreamed of travelling to Italy’s capital and it turned out to be exactly as I always wished it would be.

Rome saw the birth – and the downfall – of civilization. From the heady days of the Roman Empire to Medieval times, and the juxtaposition of modern shops and hotels among Roman ruins is a stark reminder of the city’s turbulent history.

The Pantheon, and the Oculus in its dome, is breathtaking. The Oculus is the only source of light in the dome, and is positioned in just the right spot to let the sun in at a particular time of day to help the Romans tell the time and date. At midday the sunlight hits the metal grill above the doorway filling the space with light, which would have illuminated the emperor back in the day!  Open to the elements, when it rains there are 22 well-hidden holes in the dome that help to drain the water away. It’s a masterpiece of functional design! Make time to visit the Colosseum in daylight and at night. It’s breathtaking in any light! It’s a bitter sweet experience visiting the Colosseum. You get to tour the areas where the slaves and the gladiators and the animals were held, and it’s impossible not to admire the magnificence of the architecture, but at the same time I felt sad for the brutal history of the place.

Until the 1960s the Colosseum was open entirely to the public, but as it became degraded through all the tourist foot traffic, the Romans began to regulate the areas open for viewing. Don’t expect to have a clear view of any of Rome’s famous landmarks. It’s bustling every hour of the day and night, but that’s part of the experience and the energy of the place. And don’t just tick off the Pantheon and the Colosseum – while they are Rome’s most famous landmarks, the city is littered with other significant architectural works.

As with Venice and Florence, you just have to lose yourself in Rome. By all means take a map with you so you can find your way back to your hotel (and wear sensible shoes or you’ll turn an ankle on all the tiny cobble stones in the laneways), but be prepared to wander and explore. And if you can, try to find a local who can help you find your way to the tiny, off the main drag, boutiques and restaurants which will have the most authentic gifts and food!