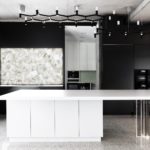 They say winning isn’t everything, but it sure is nice once in a while! So, I was over the moon to find out that a Warrandyte kitchen I designed, that was built by Seaview Cabinets, won the best kitchen and kitchen design valued over $80k in the FIAA Industry Awards.

This house was a huge project over a couple of years and, if you saw my show ‘World of Design,’ I walk through this house and the empty space of where that winning kitchen was to go, with my clients.

My brief for this project was to create a statement kitchen that worked with the design of unique 3-tone concrete envelope of the building, but also fulfilled a multitude of functions for the family of six (including four kids aged under six) that utilise it – two objectives that don’t always intersect.

My clients wanted high-functioning appliances that blended seamlessly with the surrounding kitchen, a butler’s pantry to serve as the engine room of the kitchen, and a bench top to serve as a place for the family to gather that wouldn’t dominate the space or detract from the feature wall.

The result is a kitchen that – inspired by the raw concrete building envelope – projects a minimalist, modernist aesthetic in a range of greys, charcoals and blacks, with the back-lit quartz wall providing light, colour and textural relief from the monotone palette.

I selected black appliances that worked seamlessly with the cabinetry, selected integrated fridges and dishwashers that enhanced the kitchen’s sleek appearance, and installed a downdraft range-hood to compliment the induction cooker, to ensure the quartz wall remained the feature. The kitchen wraps the walls as though supporting the floating stairs and the design highlights, rather than hiding, the dramatic zigzagging lines of the staircase. The staircase incorporates locker storage for each child, where they can stow their bags, coats, shoes and daycare items. The tallest of the lockers conceals an open rear panel that reveals a secret cubby hiding spot for the kids, a touch of whimsy amid the functionality.

A glass pivot door opens to the butler’s pantry, which incorporates another working triangle of appliances, a desk where the owner can plan the children’s multitude of schedules, and some little touches of personality including white tiles with a pink petrol finish, and a burst of bright pink in the desktop.

My goal with design has always been to complement and enhance the way my clients’ live, and I feel with this kitchen that we have provided the family with a kitchen that will support and nurture them for many years to come.